Andorra also has a large number of tourist attractions, which will make the experience of skiing in its mountains even more satisfying and also make it a privileged tourist destination during all seasons of the year.

Where to ski in Andorra

Andorra has two major ski resorts, Grandvalira and Vallnord. But don’t be fooled by such a small amount of facilities, because they are two immense stations that together add up to hundreds of kilometers of ski slopes.

Grandvalira is located in the eastern part of the Principality of Andorra. It is the largest ski resort in the whole of the Pyrenees and southern Europe.

It is organized in 6 sectors: 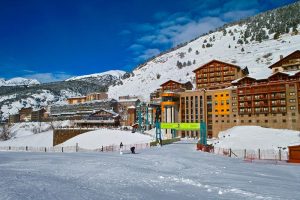 Grandvalira ski resort has a maximum altitude of 2640 metres and a minimum altitude of 1710 metres, which makes a difference in level of 930 metres in a total of 210 skiable kilometres, 124 of which are snow-covered with more than 975 snow cannons.

As for entertainment areas, it has 4 stadiums or competition areas, 4 snowparks and 5 themed children’s areas for the enjoyment of children.

Between Encamp and Pas de la Casa, there are access points to each of them, most of which are adapted for people with reduced mobility.

Although it is organized in sectors, Grandvalira’s forfait is unique for the whole season without limits. All its slopes are between 1710 m and 2640 m, which guarantees that in winter you can find quality snow during practically all the season. In addition, and if this were not enough, more than half of their tracks have artificial snow.

In addition to the traditional green, blue, red and black slopes with their corresponding lifts, it also has a 12 km cross-country ski slope, 4 competition stadiums, 4 snowparks and 5 themed children’s areas.

Vallnord is located in the western part of Andorra. This ski resort is formed by the union, in 2005, of what were initially two different ski resorts:

The merger into a single ski resort, unified the entire ski area that extended through the valleys of the parishes of Ordino and La Massana, although each resort has retained its own initial characteristics.

It has a total of 93 skiable km spread over 70 ski slopes.

Sectors Pal-Arinsal in the ski resort of Vallnord

This area is made up of two sectors, Pal and Arinsal, which are connected by cable car and have a maximum height of 2560 metres, a minimum height of 1,550 metres (1010 metres difference in level), in a total of 60 skiable kilometres.

Due to its north-north-east orientation in Arcalís you can enjoy skiing for a few more weeks.

Vallnord also has 11 slalom slopes, 10 mountain ski itineraries and free ride itineraries, not all of which are signposted and marked.

One of the advantages of Vallnord is that it also has a free, uninterrupted bus service linking the main towns of the principality with the foot of the track.

Where to learn to ski in Andorra

The two resorts are staffed by hundreds of professional, multilingual instructors who offer skiing and snowboarding classes for all levels, beginning at age 6.

There is also the possibility of learning or perfecting other disciplines such as telemark, freeride or freestyle.

Grandvalira’s ski school is called the Ski & Mountain Academy and has 6 centres spread all over the skiable area of the resort.

For its part, Vallnord has a school in each of its sectors.

What are the best skiing dates in Andorra?

Throughout the Principality, the ski season usually begins in early December and ends in mid-April, although logically, it can vary each year depending on weather conditions and whether it is a snowy year or not. The best months to ski in Andorra are usually January and February.

It should also be borne in mind that many years the ski season usually ends with the end of Easter.

How to ski in Andorra if you have small children

Having small children doesn’t have to be an inconvenience to practice our favorite sport. Both Vallnord and Grandvalira have nursery facilities for young children between the ages of 4 and 8, in which they will be introduced to activities related to snow and skiing, so it is necessary that they are equipped with appropriate clothing, as well as glasses, helmet and gloves.

Grandvalira also has 4 kindergartens for children between 1 and 4 years old. These facilities are located in the sectors of Canillo, El Tarter, Soldeu and Grau Roig.

And since skiing entails a certain risk, don’t risk it and take out a ski insurance policy, whatever you may be going through. The one you pay at the station only covers the transfer from the track to the infirmary, so I advise you to hire a more complete one.

What to do in Andorra without skiing

When you go skiing for a few days, it’s not uncommon to take a day off in between. We may also be accompanied by people who, for one reason or another, are unable or unwilling to ski, even though they feel the imperative attraction of snow.

For both, the two ski resorts offer leisure options with numerous activities, being possible to do snowtubbing, mushing, snowmobile routes, or routes with snowshoes, among others.

You can also purchase a ski pass for non-skiers that allows you to ascend to areas from which you can take a walk or enjoy the snow.

In Vallnord there is also the possibility of doing a tour in the cable car of La Massana.

In addition to all these natural attractions, Andorra has the great attraction of shopping. In Andorra La Vella you have at your disposal a whole paradise of shops in which, without a doubt, you will find everything you are looking for. In the great Merixell Avenue you have a great diversity of shops at your disposal, in which you will see an enormous variety of perfumery, fashion, electronics or jewellery items.

And don’t forget the rich heritage of the Principality of Andorra, with its Romanesque churches and popular buildings. Visits that you can alternate with their art galleries and museums.

Where to stay in Andorra

If you want accommodation on foot in Andorra, you can find it in three Parishes: La Massana, if you are going to ski in Vallnord, and Encamp and Canillo, if you are going to ski in Gandvalira. These towns are very close to the capital, Andorra la Vella, which allows you to move to the shopping area, visit the thermal center Caldea or go to restaurants and cinemas, in a few minutes, by bus or car.

From these locations you can access the tracks directly by means of cable cars, which is very convenient, as you don’t have to worry about where to park your car at each of the stations.

If you decide to stay in Andorra la Vella or Escaldes Engordany, you can ski every day in a different resort and it won’t take you long to get to each of them.

There are other locations further away, but they are also at the foot of tracks such as El Tarter, Soldeu or Pas de la Casa, in the surroundings of Grandvalira or Arinsal in the area of Vallnord.

It’s one of the best places to ski, whether you’re new to skiing, snowboarding or walking. It is a good place to introduce children to the white sport and, therefore, its facilities are designed to welcome those who want to ski as a family.